Fancy a writing retreat in England next year? (Okay, that question is really redundant – who wouldn’t?!)

Kate Forsyth, award-winning author and valued AFTS member, will be running a writing retreat and literary tour in England from June 19-June 26 2016.

Kate will guide you as you write, read, listen, learn and discover all aspects of creative writing, covering everything from the initial discovery of your story all the way to finding a publisher.

Woven into this writing retreat are trips to places that will inspire you to put pen to paper. Some of the locations on the literary tour include Oxford, the Cotswolds, Stonehenge, Warwick Castle, and Stratford-upon-Avon (the birthplace of William Shakespeare).

As Kate has written:

If you’re writing fiction and want to explore history and mythology, or if you wish to instil a little magic and wonder in your writing, then you’ll love this unique experience.

After months of discussion and preparation, the AFTS committee is delighted to announce the theme of our 2016 conference…

Into the Bush: Its Beauty and Its Terror

Here are the details:

Where: We have chosen to hold our conference in Victoria this year! For our venue, we have chosen the Glen Eira Town Hall, Caulfield, VIC, 3162.

Our call for papers is now officially open, and will close at 5pm on Friday, 29 January 2016. See the call for papers below, or print off a PDF version here: AFTS 2016 Conference – CFP

Call for Presentations – Into the Bush: Its Beauty and Its Terror

‘Into the Woods,’ is a phrase that has become closely linked to the fairy tale genre. It conjures up all manner of fairy tale images, such as roguish wolves waiting behind trees and lost children stumbling upon gingerbread houses.

But how does it translate into the Australian fairy tale tradition? For our third annual conference, we will be exploring what happens when we venture… ‘Into the Bush.’ Australian fairy tales reflect many of the realities of the bush, while also reimagining it as a space of magic and mystery. Whether it is depicted as real or otherworldly, the bush always encompasses duality – it is a place of both beauty and terror.

We are now accepting proposals for storytelling performances, musical performances, academic papers, and creative readings. We would also love to hear from artists wishing to display and/or sell their works at the conference.

Presentation topics may include (but are not limited to):

Please email your proposal of no more than 200 words to austfairytales@gmail.com by 5pm Friday January 29, 2016.

We look forward to receiving your proposals! 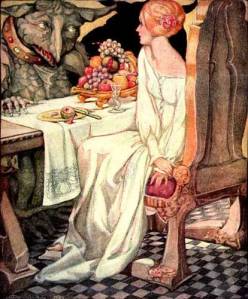 Even if you can’t manage to get to a Fairy Tale Ring, you are always welcome to send in stories or artwork inspired by the tale.

If you’re not part of a local Fairy Tale Ring, but would like to be, Contact us for more information.